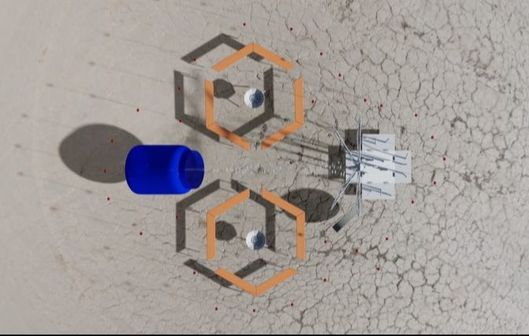 Flight of Illumination will have an oval footprint of 50’ in length and 30’ in width  with a central sculpture of an opened blacksmithed jar,lifted towards the sky by a few Acolytes. Bursting forth from the jar are dragonflies, increasing in size and swooping up to a giant dragonfly perched upon a tall reed. Surrounding the central sculpture will be a communal  gathering space filled with smaller pieces from previous years’ projects to provide a more community driven ambiance.


The jar will be 6’ feet long and 4’ feet wide made out of hand forged panels of steel. The panel design will be inspired by the Guardian of Dawn, The Agora of Light, and the Well of Darkness. The jar will be tipping over but will be supported by Acolytes from the first chapter of this story, Guardian of Dawn. Staged next to the jar will be a more Acolytes carrying away the lid to the jar so the dragonflies can be free. The inside of the jar will contain propane flame effects that will backlight the panels at night.

Starting out at 6” wide, the dragonflies will increase in size until they reach 24” in length/width, with the smaller dragonflies closer to the jar and the larger dragonflies closer to the giant dragonfly. LEDs will be attached to the smaller dragonflies to provide lighting during the night. The small dragonflies themselves will be cut out of steel and their shape will be created by a CNC milling machine. The giant dragonfly will have a 12’ wingspan and a segmented body perched upon large reeds made of 2” schedule 40 steel pipe. The wings will be piped for propane. The segmented parts of the body will contain decorative blacksmith work such as scrolls and rivets.. At the base of the giant dragonfly will be flowers which contain LEDs as the anther for the stamen and will up-light the base of the large reeds.

Surrounding the center piece will be a communal space with  pieces from previous projects ;  Zen Gardens, benches, and fire torches. The Zen Gardens are metal bowls filled with black sand which is piped for propane. The sand works as a diffuser for the propane, which, when lit, allows the participants to draw designs in the sand using the provided forged fire tools.  Benches will be placed around the Zen Gardens, giving the participants a nice place to rest and warm up as they admire Flight of Illumination. Propane torch fence pieces, from the Piazza di Ferro, will be scattered around the space to create the illusion of a swamp or bog. The torches will undergo modification to make them more organic in appearance. There will be smaller reeds, made of 1” pipe containing flood lighting placed around the communal space. Lastly, there will be flexible PVC posts with solar or battery powered LEDs to assist with perimeter lighting.

Philosophy of Flight of Illumination

Flight of Illumination is the fourth and final chapter of the Guardian of Dawn allegory.  In the first chapter, Guardian of Dawn, the Acolytes were protected from the darkness by the light of their Guardian.  When their curiosity of the dark overwhelmed their fear, they journeyed out into the night and built the Agora of Light to warm and welcome fellow wanders.  Then they got a little too proud. Bursting with virtue and ego they went off in their own directions to evangelize their new found worth.  But the world is cold and lonely when you are a self-centered dick.  They came to realize that without each other their individual virtues became burdens, humbled they trekked back to find their peers at the Well of Darkness.


In the beginning of their epic journey when they still circled the Guardian, the Acolytes held jars filled with light to fight back the darkness.  This hoarding of light became redundant when, after many struggles and challenges, the Acolytes realized that when they all worked together they were rich with their own light.

Flight of Illumination is the release of abundance.  By freeing the glowing dragonflies, the Acolytes are offering up their wisdom and new found hope into the world.